As folks progress from institutional podium churches toward organic participatory churches, they often allow themselves to continue being defined by the institutional church (“IC”). This arises not so much because they retain the attitudes and practices of the IC, but because they are still holding onto the disillusionment that emerged when they began to see the IC’s shortcomings and unbiblical traditions. 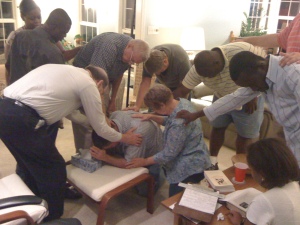 For many of us, when we finally leave the IC there is a season where we perceive and react to things not out of freedom, but rather out of not wanting to be like the IC. When we remain in a reactive mode, however, we remain in bondage to our past IC experiences.

In that place of reaction, our reality is still shaped by the IC rather than by who God wants us to be and by His promises for us. By reacting to the past, we are not able to grasp the future.

The best analogy is Israel’s journey out of Egypt and slavery, into the wilderness, and finally into the promised land.

Eventually, in my own life, I had to get to the place where I not only was delivered from Egypt, but was willing to let God take Egypt out of me. Like with Israel, that happened in the wilderness. It was hard, and took several years, but it was necessary in order to then cross over the Jordan River into God’s promises – where there is life and freedom and joy.

The resulting fellowships that are emerging in our area, among those who also have made it to the other side of Jordan, are renewing and refreshing and were worth the journey!

For those still in transition, don’t expect to be able to bypass the wilderness. The wilderness is dry and scorching, but God uses it to burn out of us those things from Egypt that otherwise still define us. It is part of God’s plan, because it is not enough to take a person out of Egypt. Rather, we also must allow God to take Egypt out of us!