This morning, as I was pulling out of my driveway to meet with some guys in the jail, I felt the Lord say it was time to plant a church among them. 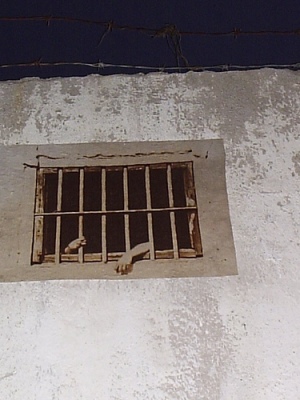 Indigenous Church in the Local Jail

I’ve been mentoring and building relationships with a group of thirty or so men in the jail, as we periodically meet to discuss the things of God. Some are believers, and some are believers in the making.

This morning, I was prepared to share with them about slaying those giants in their lives which stood in the way of God’s promises.

But I felt the Lord say, instead, that it was time to actually start an indigenous church in their housing unit.

This sense that it was time to plant a new church among them did not strike me as the least bit odd. I am part of a fellowship that has planted various sister churches that are thriving in other housing units in the local jail, as well as in other improbable places. So the sole issue for me was simply being receptive to the Lord’s timing, by acting only when and how He says.

This morning I set aside my plans as the men and I talked about Jesus being in us, so that Jesus becomes manifest among us, and thus Jesus becomes expressed through us.

We talked about how this is the foundation for authentic church.

We then talked about Ephesians 4 and how each individual has particular gifts that the rest of us need, and how together we are different but integrated parts of the whole Body of Christ.

I joked with them about how I am the asshole of the Body of Christ, because He often uses me to get the crap out of people’s lives. They laughed, but also understood that they too had something unique to offer and that unless we all participate in each other’s lives by ministering one to another – as we share the life of Jesus in us with each other – we have little hope of finding health and wholeness.

We also looked at 1 Corinthians 14 and how Paul commanded that when we gather together we each are to have something to contribute, rather than expecting to always receive. Thus, church meetings are active and participatory.

Finally, we talked about how Jesus is present when two or three gather in His name, and how God often meets us and our needs through each other.

The great thing about planting churches in the jail is that the men aren’t saddled with all kinds of religious “stuff” to unlearn. They “get it” right away.

Individuals of Peace and Hospitality

Towards the end of our time together, I told them it was time to start being the church in their unit. I then asked who, among them, were men of peace – the social glue, so to speak, of their housing unit.

They quickly identified several men, who seemed embarrassed – which was good because there were no ego agendas among them. I asked those guys to come forward and stand around me. Then, following Jesus’ instructions in Luke 10, I explained to all of them that I was going to bless those men of peace, because Jesus wanted to use their gift of hospitality to pull them all together each evening for fellowship.

You see, God gives some the special gift of hospitality and peace, and we see in Luke 10 that those attributes are vital for bringing forth a church in a new community.

So, following the example of Luke 10, I asked those several men of peace to identify some issue in their lives or circumstances where they needed the Lord’s blessing. When they did so, I held hands with them and prayed a blessing over them as I asked the Lord to meet those needs.

Now here’s the neat part about planting churches, which I have seen time and again. This week, the Lord is going to answer those prayers and bless those men. And when He does, they in their excitement will become catalysts for attracting others into fellowship. And from that, a new church will merge.

In fact, I expect to see that new church in operation when I return next week, and I will then join them on occasion to simply encourage Jesus in them, among them, and now through them.

I’m not so sure why we make this so complicated.

Maybe it’s because we don’t trust that Jesus knew what He was doing when He instructed His disciples in Luke 10 on how to usher the Kingdom of God into new communities.

Maybe it’s because we don’t trust that God will bless those individuals of peace in that community, and then use them to attract others into His Kingdom.

Maybe it’s because we think it’s all up to us.

But nothing could be further from the truth. If anything, my role is very limited: I am to bless those whom God has pre-positioned as catalysts of peace and hospitality, gently encourage the emerging believers, and then get out of the way so they can come forth, minister one to another, and participate together in the joy of knowing Jesus.

Once that foundation is laid, the rest just sort of naturally follows.

I was unable to return to that housing unit until a month later. When I did, I was swamped by guys telling me how Jesus was doing amazing things among them as they met together. Their enthusiasm was contagious!

It’s now three months later, and that church is truly indigenous and going strong, just like I knew it would.

When we minister and plant churches the way Jesus taught us to do it, it works. Imagine that!

I just planted the seed, but Jesus actually brought the increase. And it didn’t cost a penny to do, require that I assemble an upfront ministry team (in fact, Biblical leadership in a local church emerges from fellowship, and not fellowship from leadership!), hire a professional worship leader, buy expensive sound equipment, or involve any of the other complicated stuff and methods the so-called consultants charge big bucks to teach you.

I estimate that in just the last three months alone, we’ve seen around 50 men receive Jesus through the indigenous churches we’ve planted in our local jail – and the spiritual maturity they are finding and reproducing among each other is astounding.

We are seeing the same results in the homeless community and in other segments of our county as we go and offer to help be the church with you and your friends, rather than invite you to come and attend church with me and my friends.

What a simple, but profound, concept!

For more information on how Jesus taught His disciples – and us – to plant churches, see my blog on Participatory Church.

That one church plant has now blossomed into at least seven additional fellowships in the jail, in addition to the others already existing there. I believe there are more, as men go to other units and facilities, so those seven are just the one’s I personally know and have met with.

What is really neat about these new fellowships is that they all arose at the initiative of the inmates themselves. Furthermore, they are populated with primarily new believers.

Life reproducing life, just like we see in the New Testament.