One of the biggest lies you hear these days among the “hip” crowd goes like this: It’s not about religion, but a relationship. 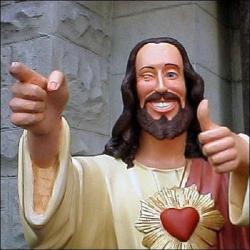 Folks, sometimes your “relationship” with Jesus – especially when it becomes insular and consumed with your own sensibilities – is a stench in God’s nostrils.

If that offends you, get over it.

Oh, I know, I know. Your “relationship” with Jesus feels warm and fuzzy. But if that’s all you have going for you or your concept of “ekklesia”, trust me on this: it won’t last. God will tolerate it for awhile, but not forever.

Here’s what Jesus tells us in His own words (aka, that inconvenient thing called “Scripture”):

Religion that is pure and good before God the Father is to help children who have no parents and to care for women whose husbands have died who have troubles. Pure religion is also to keep yourself clean from the sinful things of the world. (James 1:27, emphasis added)

I know that may seem harsh.

But in my own defense, I keep trying to engage the hipster Christian crowd with questions like:

Hey, I suspect that when everything is all about how Jesus makes you feel, it may sooth your hurts and it may even initially draw folks together, but is it really succeeding at building mature believers?

And has it succeeded at building a healthy, sustainable and functional fellowship that is making a lasting difference in your area?

Their respond is either some hollow excuse like “root before fruit” (ok, so then why can’t you ever seem to tell us about any actual fruit after root?), or else it’s deafening silence.

So you see, faith by itself isn’t enough. Unless it produces good deeds, it is dead and useless. (James 2:17)

(Side note: I see no “root before fruit” precondition here. Such pithy slogans confuse “fruit” with external growth. Jesus says that root – at any stage – without externally evident growth in the form of deeds is dead. But I digress…)

Certainly I am not advocating religious hypocrisy or salvation through works. Nor am I defending a church system which seeks compliance with someone else’s programs, mission or vision. We’ve all had enough of that.

But this increasingly “me and Jesus” focus – which more often than not is really “me and the Jesus I’ve created in my own image so I can feel safe and affirmed in my own comfort zone and sensibilities” – has simply gone too far. It has turned into introspection and navel gazing, with little in the way of external, tangible results.

Yet some keep insisting that it is all about us “being” in Christ, and continue to discount the “going” and “doing” that Christ commands.

Not everyone who calls out to me, ‘Lord! Lord!’ will enter the Kingdom of Heaven. Only those who actually do the will of my Father in heaven will enter. On judgment day many will say to me, ‘Lord! Lord! We prophesied in your name and cast out demons in your name and performed many miracles in your name.’ But I will reply, ‘I never knew you. Get away from me, you who break God’s laws.’ … Anyone who hears my teaching and doesn’t obey it is foolish, like a person who builds a house on sand. When the rains and floods come and the winds beat against that house, it will collapse with a mighty crash. (Matt. 7:21-27, emphasis added)

“Being in Christ” Without “Doing” Is A Lie

For sure, “being” in Him is important. But the final test of really knowing Him, Jesus says, is whether we live our lives “obeying” Him and “doing” the will of the Father – with the resulting, tangible evidence of external works. And if we don’t, Jesus (not me) says our supposed relationship – and all of our “spiritual stuff” based purely on our own understanding of Him – will not stand and will not save us.

Wow, ain’t that a trip? Those who become so focused on a relationship with Jesus based on their own subjective feelings and understanding of Him – rather than doing His will (as known by His commands and teachings) – are condemned to eternal judgement and separation from Him.

Taking Back the Gates

And Jesus? What does He say?

Ok, my hip friends who are so wrapped up in a Jesus defined by your own sensibilities: Put that in your introspective pipe and smoke it.

Maybe, if you finally start to “get” it, you’ll join me in kicking down Hell’s gates. Doing so means fulfilling Christ’s comprehensive call to make a difference in our culture – as well as in individual lives – as we advance the Kingdom of God by busting Satan’s strongholds.

You see, in Jesus’ day a city’s “gate” represented the center of commerce, power, justice, rule, politics, social cohesion and interaction – and all the other things that were essential to the life of a city – because they all had their focal point at the main gate and its courtyard.

That’s where the city elders sat to hear disputes, generally where justice was administered (although more likely just on the other side of the city gate), where troops were garrisoned, where merchants sold their wares, where folks went to catch up on the latest news and socially interact, where the King’s decrees and other important events were announced, etc.

By kicking down the gates of Hell, we re-assert Christ’s authority – as Lord of all – over all those cultural mandates that Satan otherwise wants us to think are his domain.

In fact, Jesus – immediately after proclaiming that Hell’s gates would not prevail against His triumphant Church – assured us that we had the authority needed to fulfill this mandate:

Notice that word “whatever”. It means, well, “whatever” – whether it be ministering to broken lives in your homeless community, feeding the poor, bringing freedom to addicts, raising strong families, showing love to orphans and widows, help others, growing healthy fellowships, proclaiming salvation, making disciples, redeeming the culture, or whatever else He calls you and others to personally go and do!

In all this, and so much more, the forces of Hell are playing defense against a Church which is victorious, engaged and involved – as we each are equipped to fulfill our various callings, each according to His grace and the gifts He’s given us.

Yes, we must “be” in Him. But we also must “participate” in all He bids us go and do. If that’s religion, then I’m all for it!

Likewise, if only one but not the other is operative in your walk – or in your church – or you are listening to those who promote one at the expense of the other, then there also is a problem.

My earlier sarcasm aside, we do need to know Him subjectively and relationally. That is critical.

But also critical is the objective obedience of going forth as He commands and doing as He commands. And the resulting good works and external fruit as we obey Him is the ultimate test of whether we in fact really know Him or only a version of Him created in our own image.

Be wise and discerning, my friends. Many talk a good talk. But where are their external positive results and good works?

Can they show evidence of actually kicking down Hell’s gates – beyond simply pointing to some success at forming an insular, introspective expression of “ekklesia” that is more about their own sensibilities than about the King of Kings and Lord of Lords?

So next time you say it is all about a relationship and not religion, forgive me while I step around the corner to puke. I, and God (I suspect), have had enough of your self-consumed spirituality. It’s time, folks, to grow up and go out.