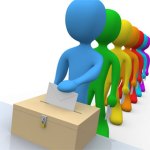 Leading up to Tuesday’s elections here in the United States, I often used this blog and Facebook to urge Christians to vote. (See Does Jesus Want You to Vote?)

When I did, I always got heated push back – mainly from other Christians who oppose Biblical civic engagement.

Generally, they think God is only interested our personal relationships with Him, or that He is solely focused on the Church.

In effect, they believe that He has ceded His authority to Satan by withdrawing from everything else – thus adopting a gnostic worldview which says we should only focus on “spiritual” things (which are good) and avoid corrupting ourselves by seeking to redeem any aspect of the “world” (which to them is always evil).

At first, this bothered me. Scripture clearly tells us that Jesus – as our risen Lord – in fact has all authority in heaven and on earth (Matt. 28:18); has ordained civil government for the benefit of society, defines its proper responsibilities, and says that its officials are to be His “ministers” in fulfilling those responsibilities (Rom. 13:1-7); and that we are to go and redeem not just individuals but “nations” (actually, “cultures” in the original Greek) (Matt. 28:19-20).

But then it dawned on me: Many of those Christians who oppose redemptive civic engagement also tout an existentialist theology which rejects the plenary authority of scripture as the written Word of God. The strong correlation between the one position, and the other, was stunning.

The more I thought about it, their dismissive attitude towards voting made sense. If everything for them is defined by and limited to their personal perception of Jesus – rooted in their own sensibilities rather submitting to His authoritative Word of scripture – then logically their faith has no practical relevance outside themselves and their typically insular, anemic fellowships.

From their viewpoint, why vote if you have no answers, apart from your existentialism, for the issues confronting a world that Christ yet loves and died to redeem – including the institutions He ordained in scripture, like civil government?

Sometimes I can be dense, but finally it dawned on me: It makes no sense to urge them to vote.

Beyond their limited existential perception of Christ, rooted in their postmodern sensibilities, they don’t see scripture as containing authoritative propositional truths that are relevant for all spheres of human endeavor, culture and society.

Thus, if they were to vote, they would be voting their postmodern sensibilities instead of being engaged in the hard job of seeking to understand and apply His precepts, as revealed in scripture, to all of life.

Yup, sometimes I’m dense – but I eventually realized that it’s a GOOD thing they don’t vote or otherwise seek to influence civil government. For the good of the nation, let them stay safely ensconced in their insular, existential cocoons!

Finally, I want to express my gratitude for those who care enough to vote or otherwise redemptively engage your culture and your nation in whatever ways are available to you.

In Tuesday’s election here in the United States, none of the candidates I voted for won, but that’s OK and I am totally a peace with the outcome.

I know that God remains sovereign over the nations and will honor – in His own ways according to His own purposes and in His own timing – the faithful obedience of His people as they seek to extend the blessings of His Kingdom and His precepts even to the kingdoms of this world.

He only calls me to obey, as best I know how, and then trust the rest to Him.