May 28, 2015 By Crossroad Junction in Existentialism, Frank Viola, Mysticism, The "Beyond" Cult Tags: meme 1 Comment 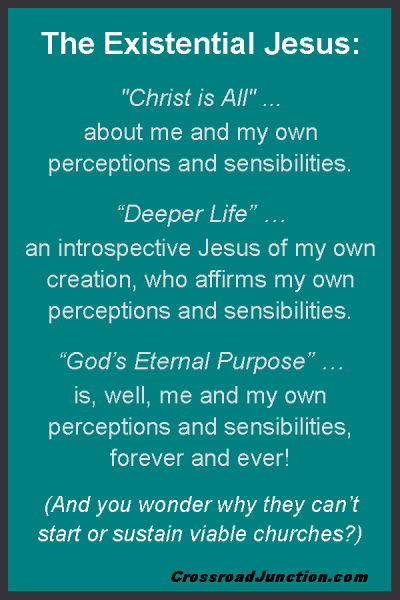 Their existential Jesus is another Christ … of their own creation.

May 10, 2013 By Crossroad Junction in Epiphany, Mysticism Tags: meme 1 Comment 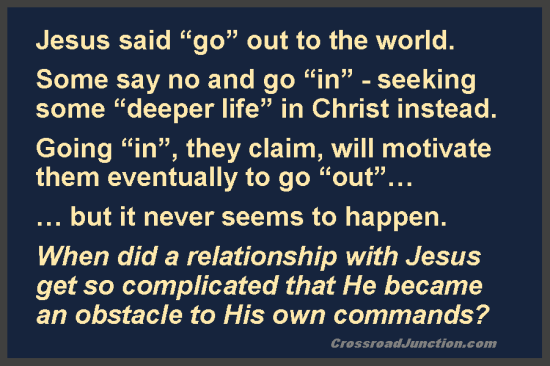 There are those who promote an insular “deeper life”, which never seems to go anywhere. Have an adventure! Seek Christ’s authentic life instead.
https://crossroadjunction.com/2012/07/20/religion-3/

A strange new doctrine has emerged over the last decade to support the old dualism of everything being about my personal, subjective relationship with Jesus – to the exclusion of any transcendent, objective moral code or (in some extreme cases) even Scripture itself.

This new doctrine goes on to say that we should only want the subjective, relational attributes of Jesus and not let any objective concept of what is true, real and right get in the way. This is because, they say, the Tree of the Knowledge of Good and Evil represents things like morality, objective standards, Scripture, commandments (again, this is of dubious exegesis, but again, that’s not my point), and anything else that may contradict their feeling-driven experience of Jesus .

Like all great errors in Church history, this one has enough truth to be tempting. But truth out of context is deadly.

END_OF_DOCUMENT_TOKEN_TO_BE_REPLACED 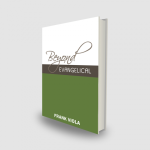 Although it largely consists of re-prints of his prior blogs, it has lots of good stuff … so long as you take it in context.

That context is a repeated emphasis by Frank on an way of relating to Jesus and the world which is sometimes called Christian existentialism, which is hardly surprising given his repeated praise in his blog of existentialist theologian Karl Barth. That existentialism seems to be rooted in the belief that all externals (social problems, cultural problems, family problems, church problems, etc.) will be resolved as we internally connect with the person of Jesus. When we do this collectively as “ekklesia” (the Greek word translated “church”), we then fulfill God’s “grand epic”.

Although this sounds good, most problems throughout church history come from truth out of balance. Presumably, anything outside of Frank’s understanding of who Jesus is, and what Jesus is about, is a distraction. (See my prior blog series, Beyond Evangelical?) Frank Viola nonetheless goes to great length justifying his existentialism by proclaiming the truth that “Christ is all”, but then makes the mistake of interpreting that truth in ways which limit Christ and thus lead to a new legalism.

Beyond Evangelical, by Frank Viola

Whereas the old legalism, which he does a good job of picking apart, was all about “doing” and “not doing”, the new legalism is all about telling folks what Jesus should look like in us, and thus who we can “be” and “not be” in Christ. Along those lines, his book is an apologetic for how Christ from his “beyond” perspective should be the new norm, combined with a polemic against how Christ is expressed in others.

As I’ve noted before, however, the “all” in Frank Viola’s “Christ is all” looks and feels to many of us who’ve been around longer than Frank to be little more than a narrow set of sensibilities that are essentially millennial and post-modern in attitude. This is in contrast to the differing concept others of us embrace – of a multi-generational, multi-graced, multi-called and multi-gifted Body of Christ that includes all “tribes” (to use Frank’s term).

This book, at its heart, is Frank Viola’s apologetic defense of his “beyond” tribe as against all other flavors of evangelicalism. Rather than seeing the strengths of other tribes and how they have much to teach and add to his “beyond” tribe’s own grace, gifts and calling, he keeps talking in very general terms about how his “tribe” is beyond them.

He does this by putting folks into very artificial categories – often with somewhat inaccurate characterizations, sometimes grossly distorted histories (the errors of which I can personally attest to based on my own direct involvement) , and repeated warnings about all the problems found among other classes of Christians. Yet those other believers who he keeps characterizing in unflattering ways (yet with a measure of charm) candidly look nothing like any fellow believers I know.

In essence, Frank Viola puts everyone into categories to contrast the rest of the Body of Christ with his own tribe – while also paradoxically going out of his way to say we should be beyond categories.

For example, I kept reading his descriptions of all those bad “fundamentalists” and “Religious Right” boogie men – with stereotypes that seemed to be lifted more from the editorial pages of the militantly secular NY Times or the diatribes of MSNBC talk show host Rachel Maddow than from any real fellowship with real brothers and sisters in Christ – and just shook my head over and over as I kept trying in vain to think of anyone I actually know who actually fit his prejudicial caricatures.

But hey, let’s not let real brothers and sisters in Christ – with real lives – get in the way of a good narrative on how my group is “beyond” everyone else. Right?

In pointing out all the flaws of others – in a very charming and nice way, which I couldn’t help but admire – Frank Viola then fails to give a single real life or practical example of how his “beyond” approach would look or do things differently. Again, there is not one concrete, real world, real life example in the entire book. None, nada, zip. It is simply a litany of aspirational platitude after aspirational platitude – some good, some naive, and some certainly open to a more balanced, inclusive perspective.

“Beyond Evangelical”, like much of Frank’s blog by the same name, legitimately raises valid questions. I agree with him on the need to move from isolated individualism to a more comprehensive expression of “ekklesia”. I commend him for that, although I have a broader view of Christ and His Body than the existential theology my “Beyond” brethren might allow. Nonetheless, this critique of his book comes from the perspective of “ekklesia” – as my life is devoted to finding, experiencing and working out what ekklesia looks like with an active and diverse community of fellow believers here in Virginia.

Yes, Christ is all, but our “all” looks a lot bigger in our fellowships than Frank Viola’s “all”.

Otherwise, from a purely aspirational point of view there is not much to dislike in Frank’s book. But if you are looking for substance and – like me – looking for him to articulate clear alternatives beyond his platitudes and his contrasting negative stereotypes, then you will be left hanging.

It is the easiest thing in the world to point out the splinters in everyone else, but to not see the log in one’s own eye.

In my experience, there are some big log’s in the eyes of the “Beyond” tribe. My challenge to Frank Viola is to prove me wrong: Give us examples. Surely, after all these years of touting what I see as a somewhat myopic existential view of what “Christ is all” means, he can start to point to examples of how real people are doing real things to express his “beyond” platitudes in the real world – beyond their own individual faith and beyond what strikes many of us as their insular fellowships and tendencies toward a rather insular faith. Both his blog, and this book, utterly fail to do so.

Rather than build relationships between various parts of the Body of Christ as we learn to esteem one another above ourselves, my overall concern continues to be that Frank feeds the growing alienation of his tribe from the broader Body of Christ. Of course, in the book he denies this, but it’s there and is a glaring blind spot nonetheless.

I think the ultimate criteria for evaluating “Beyond Evangelical” is this: After reading the book, would a typical millennial Christian (according to Frank, this is his primary focused audience) – who may be steeped in post-modern sensibilities and feel alienated – be more likely to seek out and press into a multifaceted, multi-generational and multi-“tribe” expression of Body of Christ, or less likely?

Some may disagree with my specific critique of the book, but that bottom line question fairly well sums up all of my concerns.

I believe Frank Viola still has much to offer the rest of us so long as he grows beyond the stark limitations of his Karl Barth Christian existentialism and its associated post-modern sensibilities. But I fear, instead, that this book will only reinforce the trend within Frank’s “beyond” tribe to remain mired in its millennial post-modern sensibilities by dismissing much that the rest of the Body of Christ has to offer them.