It hasn’t taken long for the Christian postmodernists among us to start accusing their brothers and sisters in the Lord of bigotry, intolerance and hate simply for eating yesterday at Chick-fil-A.

In the last 24 hours, I’ve seen several blogs and related Facebook comments along those lines. 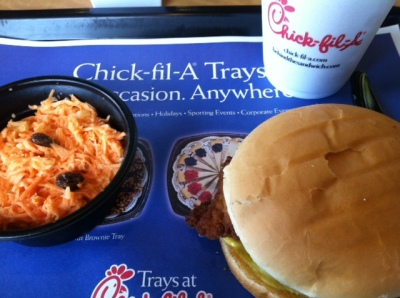 Really? Bigotry, intolerance and hate? I saw no evidence of that yesterday.

Have some become so trapped in their postmodern sensibilities that it now is wrong to stand up in a civil, respectful manner against those who want to use the power of government to silence a man of faith – and block his businesses?

Simply this: Affirming his personal support of marriage as God has ordained it in His written Word, while nonetheless being open and embracing of all who patronize his establishments regardless of their sexual orientation or differing views.

Let’s get a grip, folks.

END_OF_DOCUMENT_TOKEN_TO_BE_REPLACED

This article (see full text here) confirms my worse fears about Rick Warren, who has shown a troubling tendency to fall into the false trap of thinking that “compromise” is “compassion”. Worse still, he then publicly lied about prior comments he made on the issue of “gay marriage”.

The great thing about America is we have the right to be wrong. But that doesn’t mean we must have state-sanctioned sin. I minister a lot to people dealing with homosexuality, and showing grace to those in bondage to homosexuality does not mean compromising the truth. Grace and truth are not either/or, but yes/and. Grace without truth is sloppy agape that leaves us in bondage, while truth without grace is death. But when we reach out with both, there is life.

This is Exhibit A on what happens when our “leaders” fear man more than God. God help us all if we allow ourselves to be reduced to this type of of “leadership” in the Church today.