Haven’t the repeated failures by the existential fringe of the “organic” church movement – with authors like Felicity Dale, Frank Viola, Milt Rodriguez, Jon Zens, Keith Giles and their buddies – made it abundantly clear? 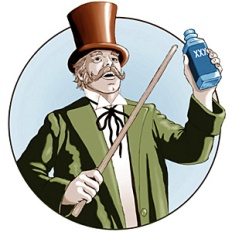 These fringe authors dismiss the plenary authority and discipline of Scripture – and in some cases even deny that the Bible is His written word – to peddle a Jesus of their own perception.

Their false Christ – who is little more than a projection of their own “deeper life” angst, post-modern sensibilities and trans-Biblical agendas – inevitably leads to dysfunctional, insular and anemic “communities”.

END_OF_DOCUMENT_TOKEN_TO_BE_REPLACED

When you “go to church” these days, it seems that staged teachings and “worship” performances by the “anointed” few during Sunday “services” have become substitutes for the diverse gifts and “one another” imperatives of the New Testament.

When you truly “are the church”, however, shared teachings, songs and diverse gifts arise among us – each and every one – by encouraging and strengthening “one another” in the Lord as functional communities which gather together.

END_OF_DOCUMENT_TOKEN_TO_BE_REPLACED 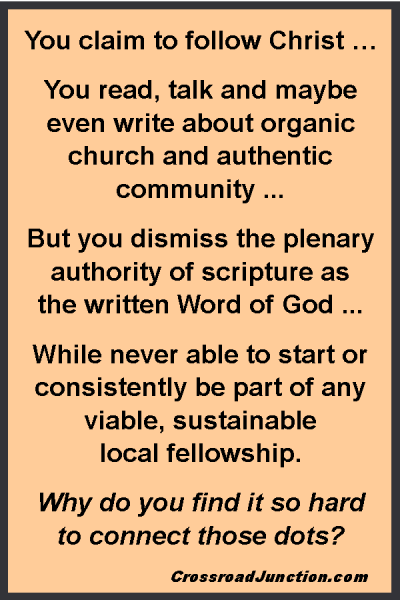 Christ is building His Church, but not on the foundation of existential angst. That’s why we need both a vibrant relationship with the Living Word, but in submission to the authority and discipline of His written Word.

Last evening some elders from among our fellowships took time to share a meal at a local pizza joint and talk – just talk, with no agenda. 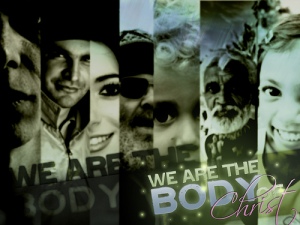 Our conversation turned to how the traditional model for church leadership is to inspire folks to “come” and be part of our own gift, calling or motivation – but that we don’t see this in Apostle Paul’s life.

Rather, Paul’s main approach was to unleash Christ within existing communities where God sent him. As Paul would “go”, he was secure enough to then let Christ be expressed through the wonderful diversity of the many unique gifts, callings and motivations He chose to bestow among His people in each church.

Thus, it was never about Paul inspiring people to come gather around his own gift, calling or motivation. Likewise, there is no example in the entire New Testament of any single “pastor”, one-man ministry or other person serving as a primary focal point “over” any local church.

END_OF_DOCUMENT_TOKEN_TO_BE_REPLACED

Participatory church? I do that.

I sit and stand when the worship leader tells me to and sometimes even sing along, do the happy clap or raise my arms with my eyes closed when prompted; 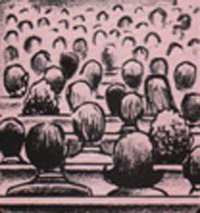 I shake hands with the guy in the pew ahead of me when the associate pastor says to greet one another;

On occasion I say “amen” when the senior pastor asks us to say “amen” during his sermon;

I put money in the plate when its passed down my row by the ushers; and

I even bow my head when told to do so during the invitation for folks to raise their hands and receive Jesus.

So yes, I participate when I go to church, thank you very much!

END_OF_DOCUMENT_TOKEN_TO_BE_REPLACED 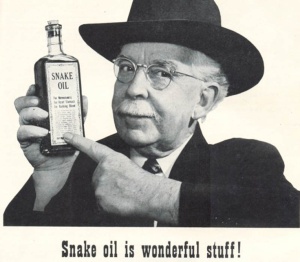 It looks like House2House Ministries and Magazine have closed shop once again.

What an unfortunate, checkered history of organic/simple church failure after failure.

How many times will it take before Felicity Dale and gang finally figure out that you can’t start and sustain healthy local churches – simple, organic or otherwise – by promoting phony self-appointed “apostles”:

– Who ain’t livin’ what their sellin’, with private lives that don’t match up with their finely-honed public persona;

– Who have no consistent history of successfully forming, maintaining or being part of sustainable local churches that look anything like what they promote in their books, blogs and conferences;

– Who deny that the Great Commission has general relevance today;

– Who proclaim that scripture is not the written word of God and that those who affirm scripture are committing “treason against Christ”;

END_OF_DOCUMENT_TOKEN_TO_BE_REPLACED

More and more people are legitimately desiring to move towards organic/simple church and away from the institutional church. 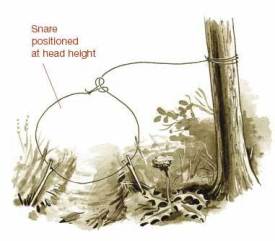 A Snare for the Unwary

Unfortunately, there are major snares for those on that journey. Too often, they fall prey to books and blogs on organic/simple church by those who either reject the plenary authority of scripture or outright deny that the Bible is the written word of God.

Although such authors talk a good talk, they typically have no consistent history of actually finding, creating or sustaining in their own lives the kind of local “organic” or “simple” church they are selling to others.

Increasingly, it seems that those who live it seldom sell it, while those who sell it seldom live it.

This makes it very hard to move forward, because there’s a lot of crazy being peddled to the unwary out there in organic land.

END_OF_DOCUMENT_TOKEN_TO_BE_REPLACED 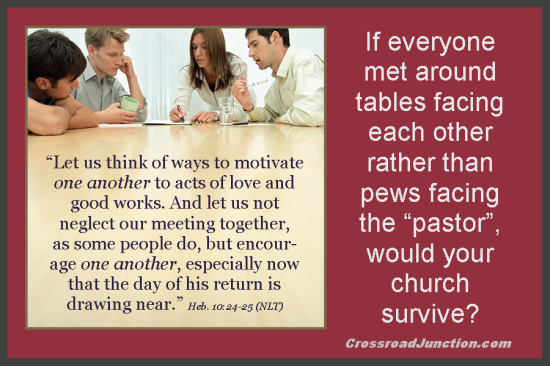 This morning, I’m not going to some high-cost building to find a parking space, be greeted by ushers I barely know, sit in a pew, be psyched up by a loud worship band, or inspired by some finely honed monologue sermon from a front podium.

Rather, my wife and I are opening our home to those who want to come and share breakfast at our table as we talk, sing, teach, disciple and encourage one another in the Lord. Our time together is not scripted or directed – except by the Holy Spirit.

Joining us will be folks with graduate degrees and fancy houses, along with folks living in the woods, and just about everything in between. We are very diverse yet know and honor one another – while welcoming others with open hospitality – as we learn to be co-heirs and co-participants together in Christ.

END_OF_DOCUMENT_TOKEN_TO_BE_REPLACED 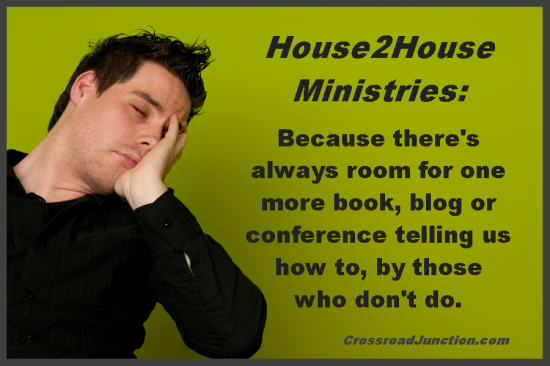 It’s time for the organic and simple church community to move beyond unbiblical mutual promotion networks by self-appointed “apostolic workers” and “church planters” who write enticing books and blogs, but generally have no consistent history of being in any functional local fellowship themselves or actually creating sustainable, healthy fellowships among others. Rather than buying into their books, blogs and conferences at House2House Ministries, maybe we need to learn some things instead from Paul’s own life and ministry: http://www.crossroadjunction.com/2012/03/17/modern-day-pauls/

Author and “simple church” advocate Felicity Dale over at House2House Ministries is personally charming, and I generally agree with her views regarding simple church and gender equality within the Body of Christ.

But my own experience with her over the last year has been very troubling – especially when it comes to the contradiction between her public positions and private actions. 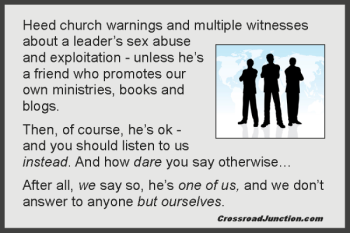 Felicity Dale: Do as I say, not as I do.

Felicity Dale is part of the self-appointed accountability team of Frank Viola, who is an author, an itinerant church leader and one of her fellow so-called “apostolic workers”. He also has a troubled history of sexual predation against young women and teenagers.

After Frank Viola rebuffed all efforts to communicate directly with him by those with detailed knowledge of the facts, some of us contacted Felicity Dale last year in an effort to resolve our growing concerns about Frank Viola’s history of abuse.

She also was given a lengthy private statement on behalf of one of Frank Viola’s multiple teenage victims, with details about how he abused that young woman and others.

That victim’s statement fully confirmed the separate warnings issued against Frank Viola by his former church. Among other things, his past church established through multiple witnesses and documents his pattern of predation and abuse – including his long-running exploitation of a teenager in that church who was half his age and a former high school student of his.

This new written statement, however, involved an additional teenage victim.

END_OF_DOCUMENT_TOKEN_TO_BE_REPLACED

This is a short, wonderful blog by my friend Steve Simms that captures very nicely what real church (regardless of whatever label you want to put on it) is all about.

What I like about Steve is that, unlike so many who pontificate on how to be the church, he’s actually doing it! 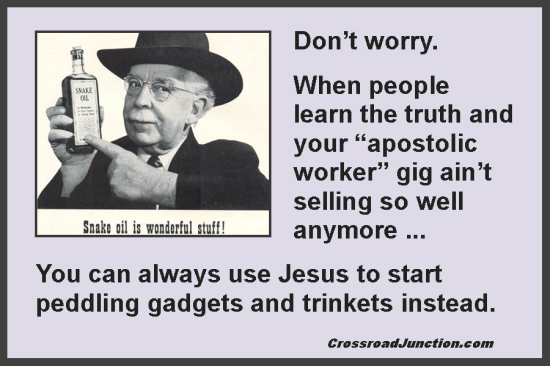 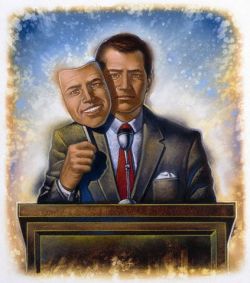 The next time you are tempted to fall under the influence of some author, blogger or other self-anointed “itinerant” authority on “being the church”, ask first if they have a history of personally being – on a sustained basis – part of the kind of church they promote.

For example, here in the U.S., the number of phonies pontificating on all things organic and missional in various books, blogs, social media posts and conferences is astounding. They talk the talk, but don’t walk the walk.

END_OF_DOCUMENT_TOKEN_TO_BE_REPLACED

Here’s a montage of my twenty most significant posts on Facebook in 2013.

When Facebook created it, it brought many smiles and a few cringes:

Feel free to take a look.

As this montage shows, it has been a wonderful, yet “interesting”, year.

I think my biggest struggle was seeing the power games, leadership abuses, lies and cover ups in the organic/simple church community at the national level – which far exceed anything I’ve ever witnessed in the traditional, “institutional” church – while still holding firm, despite their hypocrisy, to some related core principles.

END_OF_DOCUMENT_TOKEN_TO_BE_REPLACED 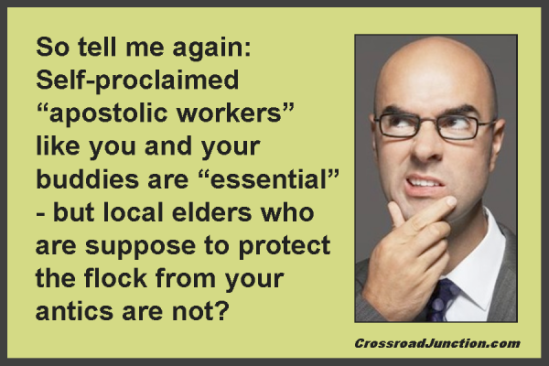 This article provides a sober warning by Dr. Olson that increasingly applies, unfortunately, to certain segments of the so-called “organic” or “simple” church community here in the West – which have come under the influence of so-called “apostolic workers” and their books, blogs and magazines.

Often, when you find an evangelical cult, you don’t have scratch very deep to find some self-professed “apostle” just below the surface.

Unfortunately, the “apostolic workers” now peddling their influence, books and conferences in the organic/simple church community – like we’ve seen with other so-called and often dead-end “new apostolic reformation” movements – are self-appointed, self-proclaimed and unaccountable (except to other “apostolic workers” who are part of their own mutual promotion network).

They also have been aggressively seeking to silence – through threats and slander – all who dare mention the history of sexual predation, abuse and coverup among them.

END_OF_DOCUMENT_TOKEN_TO_BE_REPLACED

Is Janet Mefferd Being Intimidated by the “Gospel” Mafia to Shut Up About SGM? ~ The Wartburg Watch

Finally, the truth is coming out!

For several years, Marianne and I have been deeply involved behind the scenes in helping victims of the Sovereign Grace Ministries sex abuse scandal. We’ve seen its impact on close friends, while also counseling survivors and their families through Nathan’s Voice.

I also know Boz Tchividjian, who is publicly confronting SGM about its history of sexual abuse and is mentioned in this article.

Although we can’t directly talk about all the underlying facts regarding SGM due to confidentiality, we believe that this exposé by The Wartburg Watch is spot on.

What’s happening in that case is very similar to what’s also happening in the ongoing scandal involving author Frank Viola and his team of self-appointed apostolic “workers” and his additional “accountability team” of other organic church “leaders”.

END_OF_DOCUMENT_TOKEN_TO_BE_REPLACED

The problem is not so much that organic church wannabes – who persist in writing, opining and peddling influence on all things organic without actually being part of a healthy, functional, local fellowship – are wrong in theory.

Rather, it’s that their opinions and aspirations lack a sufficient basis for being right in application.